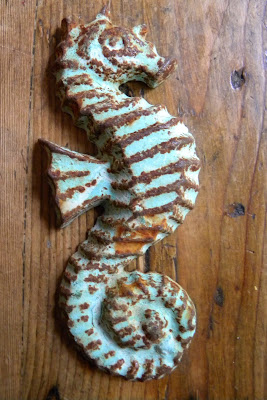 Maybe in some obscure way I am trying to deny this heat really exists so I got Wesley up early this morning and we went to the flea market at the state fairgrounds in Raleigh. I love this place, but on a day when there is a code orange alert and it's supposed to be 102 later in the day, we probably should have stayed home. I noticed a lot of the vendors did not show up, smart on their part I would say, but the ones that were there were selling, good for them! I bought this little seahorse. I plan to make a mold of him for Christmas ornaments this year, so cute! I love sea horses, the fact that the male carries the eggs and all that.....ok, moving on...... 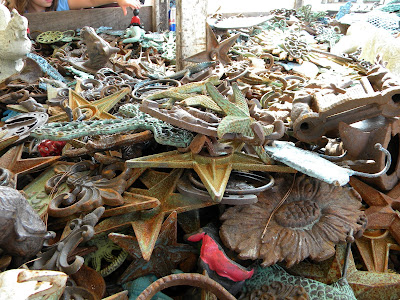 I dug him out of this pile of iron stuff, I would have bought the whole wagon but Wesley reminded me I don't really need any more stuff, good girl! 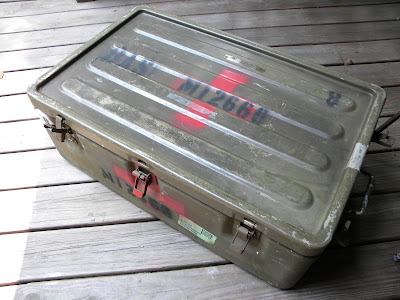 Here is the real reason we went. Last year Wes bought the coolest army jacket, Vietnam era and she wore it all winter. The guy we bought it from had a bunch of these cases and we went to see him today. Of course he wasn't there, but there was another vendor with one. The only catch was that it was full of stuff and we had to buy the whole thing. 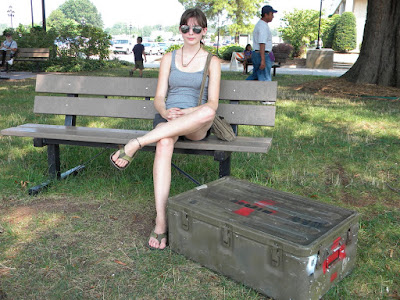 So we brought home this medic case for Wesley to take to college for storage, and we also got 2 white sailor hats, officers ties, army hats, brown t shirts, webbing, several pairs of gloves, 2 nice pairs of wool pants,chemical gloves that will be great for mixing glazes, chemical suits? a couple of small medic bags, and all kinds of other crap I have no idea what to do with. Anyway, it was fun digging through all the stuff, all of it was labeled with someone's name. It makes me wonder who all of these things belonged to, where are they now, have they survived battle, and this medic kit, what traumas has it witnessed. God bless the military for doing what many of us would never be able to, but really can we just stop having wars, it would be so much easier that way! Safe journeys to the soldiers out there, wherever you are.
at July 30, 2011

that medic case will look so cool in Wesley's dorm room this fall!
i was in an antique shop in greensboro this summer and found myself going through piles and piles of typeset thinking "there must be something in here i can use in clay"... then i moved on to bags of skeleton keys. in the end i didn't buy a thing because my mind kept drifting back to everything that i threw out when we moved and how much more i should have thrown out.
but it is so tempting... and the seahorse will be a great mold for ornaments.

Hi Tracey, I love the SeaHorse, and the army case is so cool, your Wes must be one of the coolist kids on the block.

Love that metal guy. We've bought tons of freak bottle openers and hooks from him. Can't stop digging through that pile... xo

Hi Michele, I love digging through typeset, I am the same way, thinking of how I would use it and then not buying any. Paul, Wesley is a very cool kid, she's strange, but in a good way! Laura, I ran out of cash, or I would have come home with a bunch of bottle openers too. There was a great lobster one I wanted! We should go back over there one day...

The iron pile is very tempting, you're fortunate to have Wesley (for so many reasons) and the ability to listen to her when she's right.
Our military is so good at saving lives, at being the first responders to natural disasters like the Earthquake in Haiti and so many other good things. We can still have a strong military of people who want to serve this country and other people even if we don't have war.

I love seahorses, they seem so surreal and yet they are real, I cut a double one out of a magazine recently thinking I'd made something with one I may just do that.

I once had a metal painted female masthead nude bottle opener but gave it as a gift at an xmas exchange party. it was cool.