Jesus Wants Me For A Sunbeam 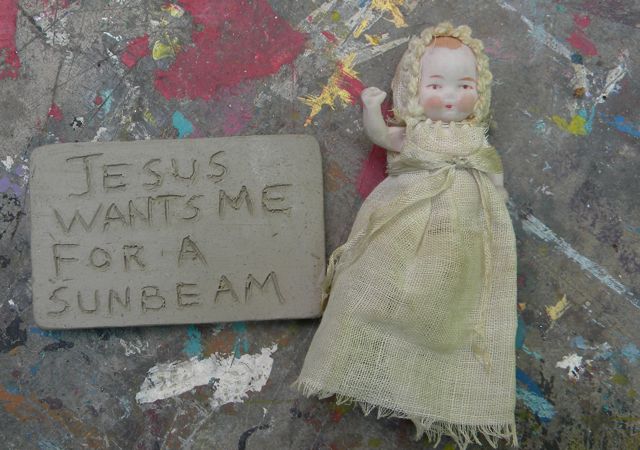 I was feeling a little pissy today after seeing the Containment Show online at Crimson Laurel. It's a great show and there are a couple of really nice houses in it. They aren't MY houses, I wasn't invited  :(  but they are really nice, and the artists that made them do wonderful things with clay and the house form. So of course I started feeling less than wonderful about my work, you know... the voices.... dang that's a great idea, wish I had thought of that..... then..... get them out of your head, do your own thing!! So I put my head down, went out to the studio, turned up loud Nirvana and got to work. 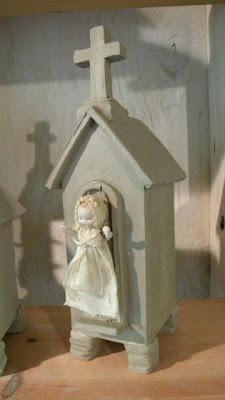 I hung little baby up on the church wall and was feeling good, so I gave myself a little talking to, it went like this:  you are in one of the nicest galleries in Charlotte, which is the largest metropolitan city in NC and you have already sold two pieces there, one of which was in a magazine ad for the gallery, you are also in a beautiful gallery in downtown Raleigh, the state capital, you are in other very lovely galleries, you are in the Carolina Designer Craftsmen Guild and the Chatham Artists Guild and you have been invited to be in several very wonderful shows this year, you raised your prices and your work is still selling, you have collectors.....  and this has all happened in ONE year.
So, shut up and just make what you make and quit worrying about what everyone else does! There! I felt much better :) and this piece with the baby hanging kicks a*%, I love this thing! 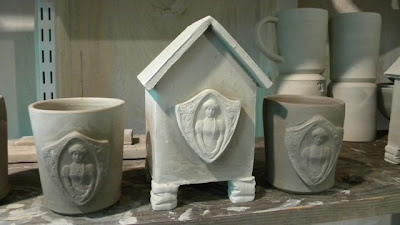 Because you said do it, I did. I put a cameo on a house and it's pretty cool, I like it with the cups. I sat down this morning and threw a half a dozen, added the sprig to a few and left some without. I forgot that I actually like throwing on the wheel. Maybe I'll just build a wood kiln and start making functional work..... become a purist, a zen potter, a cup maker.....
hmmmm....... nay, I can't glaze. 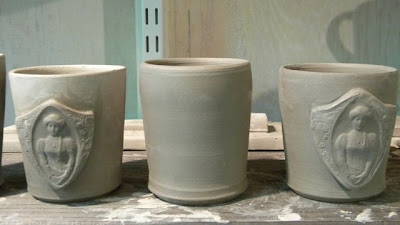 And peace to you as well, Tracey.

Without that little voice we would all be sailing happily along making ugly pots that never get any better.Necessary evil.

everyone carries that voice- it is just what you do with it.

Aaahhhh, the voices, where would I be without them :)
Thanks y'all
Xo

voices, ugh. the moon so melancholia, yes. Jesus really does want you for a sunbeam. xo

the great thing about being a wood firing pottery is that you only need to glaze the insides... let the flame and ash work it's magic on the rest.

Laura, I KNOW, the moon!
Michele, I love wood fired pottery, just getting to old to start that now, I'm afraid:)

really its the moon...i thought it was hiding at the mo!! i have this crazy notion that we need the self doubt to challenge ourselves....go on shoot me down :P works lookin awesome this week trace!!

PS- the sprig is a great addition to the work.
It plays well with what you are doing.

Hey Ang, I agree, every time I have doubts, I push myself, guess that's how I got here. The moon is supposed to be super big and full tonight!
Hey M. glad you like the sprig, she is kinda sweet although I haven't a clue what glaze to use to not lose the detail....