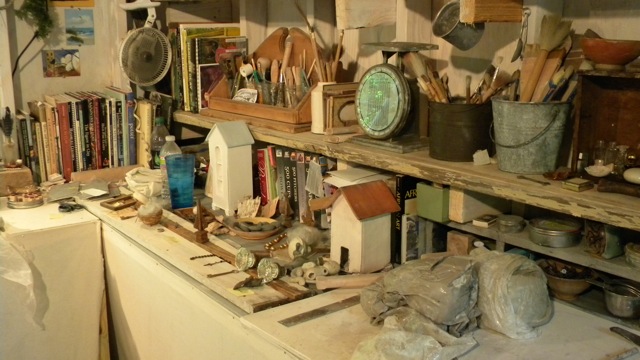 I have had a good steady week of work, except for the days we were getting Wesley moved back home. Gerry has been out of town since Wednesday shooting a golf tournament and Wesley is writing a screenplay, so I have been getting to the studio around 9am and working until 6pm.  My studio is a mess right now, I have 12 pieces made for the Lark and Key show, one piece for the Seagrove donation, one piece for a blogger and about a dozen or so pieces made for the ^6 firing week after next. I also made some experimental tiles for some shino glazes. 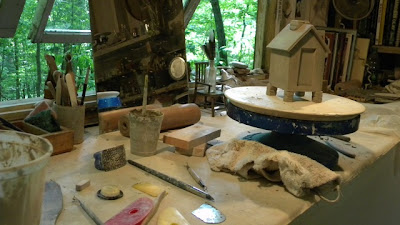 To keep my brain from exploding and to stay on course, I have stuck with just three basic forms of houses and then used them as a canvas to put things on. For some reason this seems to keep me focused  and on track to get things done. I cut out six of the same pattern, put them together, then played with them  to see what they wanted to say. Before I started making, I put out a bunch of found objects that I knew I wanted to use, so I sort of had a plan, and that has worked out really well. I didn't feel so overwhelmed and I stayed pretty much to plan. Yesterday, I was feeling caught up so I took some time to experiment with some new forms and make some other things. It poured rain in the afternoon, Wesley was in the studio with me and all was right with the world. We had a great dinner, watched a movie, and had a nice evening together.
I'm in a good work flow right now, but Gerry comes home tonight, so here comes distraction! It's so much more fun to go do stuff with him and Wesley :) 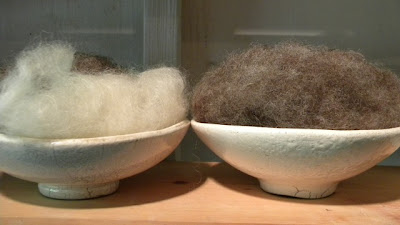 I love the way this wool that Anna Branner sent me looks in my raku bowls. These didn't sell last year for some reason, they are really pretty, so I'm keeping them. They must have been waiting for the wool. I have been trying to figure out how to incorporate this wool in some of my work. Yesterday, I made a larger barn, made a niche in it and added a bird's nest that I made with the wool. Then I made some little clay eggs that will get blue terra sig. So nice. I'll get some photos today, I forgot to shoot some yesterday. It turned out great! I also wrapped some of the wool around some twigs, which look amazing, and offer lots of possibilities as well.
My brain is starting to feel a bit numb, so I'm taking today off and Wesley and I are going to go play somewhere. Happy Sunday!

Have fun, get refreshed.

The wool nests and wool wrapped twigs are a great addition to your pieces. Great idea. Enjoy your Sunday!

Sometimes having a deadline for a series of similar pieces really calms my mind as well. Even if they are all nearly the same, just the successful productivity creates such great momentum for more ideas! I'm glad you are having fun playing with that bit of wool.

I love having the wool in my studio, if nothing else it just makes me smile when I look at it! Somehow it will find its way into my work....

ah, almost missed this post. two in a day! :) Really like your perspective about the bowls 'waiting' for the wool. those raku ones are beautiful!