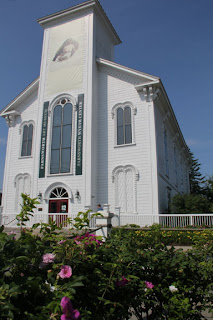 On our list of things to do in Maine was a trip to The Farnsworth Museum in Rockland Maine. They had an exhibit of Andrew Wyeth's watercolors that I wanted to see as well as a really great exhibit of Jamie Wyeth and Rockwell Kent. Both were breathtaking and wonderful. We did, however have a small episode while we were there. 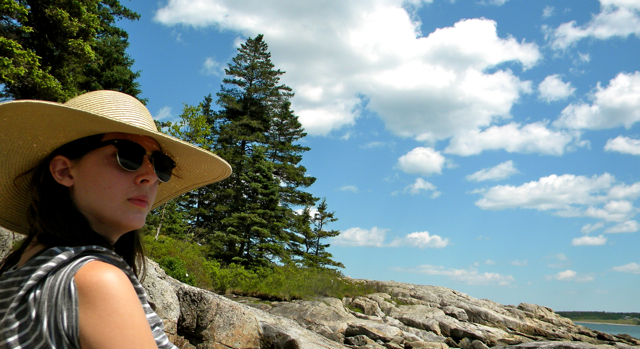 This is my child. I am very proud of her. She is a gentle spirit and very sensitive, and as far as I know, she has never said an unkind word to anyone and refuses to talk about others in any gossipy way. In fact, she hardly talks at all, and I think we have had to discipline her maybe twice. She leaves a small portion of her food for Buddha every time she eats something. She loves nature, music, art, and good food. As you can tell, I very much admire and respect her. She is one of the kindest people I know and she has such a sense of peace about her. All of you that read my blog and know Wesley are nodding your head aren't you? 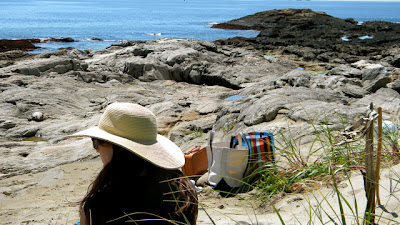 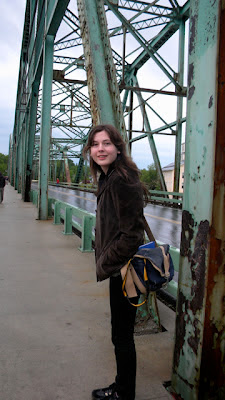 Anyway, about the incident. When Wesley was in first grade, she played softball, Gerry and I were assistant coaches for the team, I worked in the dugout keeping score, etc. One day one of the bully girls, twice Wesley's tiny little size, knocked Wesley's cap off and then pushed her on the ground. I saw this happen across the baseball field, and by the time I tore across the field to rip that little girl's head off, my body was shaking, I was screaming and losing total control of my senses. Meanwhile, bully child's mom is sitting on the bench drinking her Mountain Dew, smoking a cigarette, and yelling at her other illegitimate children. That's what Wesley labeled that day, my dragon rage. It seems to only surface when one of my family members are attacked and it is primal rage, I will tell you that. I have never known anything like it. If you are a parent, you know what I'm talking about! 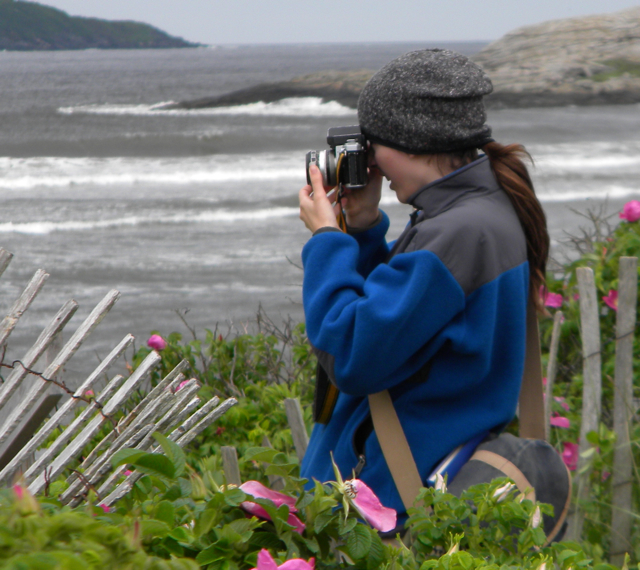 So...... we are in the Farnsworth. There are a couple of high school groups there. We are looking around, gasping at the watercolors and we go downstairs to see another exhibit. Gerry and I are still downstairs and Wes has already gone upstairs. We hear a man speaking rather sharply to Wes, but we don't quite grasp what is going on. Let me also say that my child has been going to museums and art exhibits since she was born. She has been to the Met in NY, the Smithsonian, and many other small museums and she knows how to behave accordingly. She is also almost twenty years old! Anyway, Wes is standing at a directional sign indicating the downstairs gallery. It is translucent and she is holding her hand behind it to see what's going on with it, and mean dude growls at her to not touch the sign and to not touch ANYTHING in the museum. He was really rude, we caught that much as we came up the stairs. I guess he thought she was in one of the high school groups without supervision. By the time I got to Wes, the tears had started to come. She was embarrassed, unjustly accused and treated like a child, and of course, being the polite girl she is, she just took this abuse from this moron, but felt helpless and violated, I have been in this position, I know how this feels.
By the time her dad and I figured out what had happened, got her outside on a bench to console her, and dried some tears, my rage was building rapidly. Gerry and I headed in to the museum to find mean dude, but Gerry was so furious he backed off for fear of what he would say. I didn't really care what I was going to say, someone was going to apologize to my girl! Luckily, the first person to get to me
was David Troup, the communications director for the Farnsworth. I explained to him as calmly as I could what had happened, I wasn't very calm but Mr. Troup understood and was extremely kind and understanding. He came outside with me to meet Wesley and to apologize to her and gave us free passes to come back again. He handled the whole situation in the most professional manner and I was so grateful to him for that. It was an awful experience for Wes and she had been so excited about seeing the Wyeths. Thankfully, Mr. Troup turned a bad situation around and we were able to enjoy our visit without any hard feelings towards this very fine museum. I hope Wes learned something from this experience, I'm sure I did. But that dragon rage, I cannot control, so leave my baby alone!!!!
at June 18, 2012

as my kids have grown I have had to learn the fine art of how to handle my dragon rage as they learn how to handle new situations.
I know exactly what you are talking about.
Ajay went through this for the first time and said- Mom, yes, I am that mother.
So sorry for Wes, and yet, maybe some one else learned a lesson that day.

If you love art, but don't love people...it would seem working in a gallery or museum would be a bad fit. Maybe Mr. Mean Guy could find a job in the storage room...just sayin'

Good for you and glad it was made right.

Know what you mean. If someone hurts your child, whether physically or emotionally, I think you feel at least twice your child's pain.

Hey Meredith, I am definitely having to learn to let Wesley fight her own battles, but maybe having her see me fight one for her will show her the way.
Dennis, you are absolutely right, Gerry deals with the name tag and special colored coat people all the time!
Kathy, we tried to give the guy a break and decided he was having a bad day. I have a feeling he stresses with kids in the museum.... but that's a fact of life, so get over it!
Melissa, you are so right, I feel it way worse than Wesley when she is harmed :)

The museum guy is probably much more used to dealing with the type of children that bullied Wes on the softball field than with people that a gentle like she actually is. It's sad because in either case he would probably been better off treating the person (Wes or some unruly kid) like an intelligent person.

Lori, you are so right, and it is a nice museum with wonderful accessible art. But a sign?!?
We talked about how he could have better handled the situation, like, "hello, my name is BOB, may I help you? Are you enjoying the visit? Do you have any questions about the museum...... anything but growling, DON"T TOUCH!

Uh Oh Bully alert. Bet he got a talking too from the Administrator;
maybe even got his ass canned.

i love how this guy just assumed because she was touching a sign that she would touch the art as well! glad to hear the museum wanted to make up for this jerk's gaffe.

Hey Julie, definitely a bully! I'm sure he had a chat with someone soon after we left!
Michele, I KNOW, I think that it what made us the most angry, that he just assumed she was doing something wrong, and he didn't know a thing about the kind of person she was. Wesley would be the last person in that museum to do anything wrong. I would be the most likely haha! and he walked right past me!

What you learn is that small people really are SMALL.
I would have hit the ******.

What a sad life he must have.

But Mr. Troup was a very large man, so Wesley got to see both sides, how to act, how not to act! I think it was a good experience to have. There is a reality out there that we have sheltered her from and I have worried about that. At least she got to see how to properly deal with an ass, go find his boss!

LOVE the dragon rage Tracey!!! I'm the same way, just haven't had to bust out the crazy Dad yet... touch my boys and I WILL DESTROY YOU!!... i will pick you up after and tell you where you went wrong though...and can i help you be less of an ass next time? that's ok right?
( also loving the crazy clan on holiday pics!)

Hey Scott, thanks! Yeah, there's something that takes over your mind and body when your kid is assaulted, physically or verbally. It is such a force of nature. I also feel bad that this guy didn't have the good sense to handle the situation better, his day probably got a lot worse. I'll do the same, pick you up and dust you off after I explain why you can't treat my kid that way :)

I'm a dragon mamma too. I totally get it. I'm glad they had someone at the museum who could remedy some of the hurt.... Hey, your pictures of Maine sure make me want to see it someday. Beautiful.

Hey Patricia, I think all of us moms have that rage, protect our young and all that:). Yes Maine..... But you live in a beautiful part of the world as well!