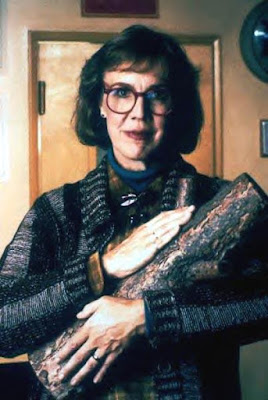 I'm sulking right now after a not so great firing. Some of the new colors I tried weren't so great, I had a feeling they would be bad, they were. I seem to like white.
Also, the new texture on the little lobster shack looking barns is too much, it overpowers the form, it needs to be a little more subtle. I really don't like the way they turned out and some of the feet fell off. You would think by now I could score and slip but sometimes I rush things. I was at the end of an old batch of terra sigilata, and it crackled on some of the pieces, not a bad look, just not what I was going for. I layered white, rutile and gray and got some good, some bad results, don't know why the difference, same application, it just looks different on all the pieces. The little pails I made look great in white, but for some unknown reason I didn't put terra sig on the inside, now I have to come up with something for the inside which means a stroll down glaze hell avenue. Damn it!
One of the roofs on the larger barns cracked open, it was ugly anyway, I hated the blue I put on it, not even sure why I did that.
Here is what I do like. The white pails look great and the shell stain is awesome. Ahab's Wife turned out beautifully, new batch of terra sig that went super white and she is so serene.
All in all, I am disappointed, I thought I would have more things I liked in this firing and I am coming up on some shows so this really isn't the time to be figuring out a new path. My thinking right now is less texture on the barns, but some, keep them white and do more with the pails and the doll sculptures. Also, the bottles I made turned out very nice. I keep thinking I need some little shit for Festifall at least and for the studio tour, but I don't want to make little shit anymore. I want to do more sculptural pieces. Yesterday I made some little fish to raku. I know Allen Bennett is the king of fish around here and no way do mine look anything like his, mine are more of a pinch pot with no back that will hang on the wall, who knows, they may not even hold up, they have little fragile fins.
I'll try to post some photos next week. Wesley leaves for college on Tuesday, so I won't be doing much for the next couple of days except fixing her favorite meals, helping her pack and staring at her :) get ready, there may be post traumatic stress episode around the end of the week when it really hits me that she is living in another town.
at August 13, 2011

Hang in there...I hate the anticipation of opening a kiln to find.....

BUT I am dying to see your lady.

Exciting for Wesley that she is heading to college...again....hang in there.

Sheep with black faces, wall tiles, pears, jewelry, wall shrines, ornaments...LOVE those pieces -make some sure sellers for your upcoming shows because cash in hand cheers every artist up!!

Wow next week will be a biggie. Keep busy, eat and drink WELL. Make some good artwork. You have done a good job with Wes and all is well -keep the positive energy flowing to her well after Tuesday, she'll feel it. xo

Thanks Anna. Yeah I think the anticipation of what "could be" always wrecks the opening of a kiln. Pre conceived notions and all that. Great advise Cindy! If only I could keep all of the new ideas out of my head and stay with what sells! Next week will be big, but exciting for all of us. Huge change, but I am so looking forward to not packing school lunches anymore. 15 years of that is enough for anyone!

boo and poo - let's hope for better for the next firing.
Best to Wes and you all as you take the new walk as parents from afar.

Yes, boo and poo, but it was expected. Parents from afar, yikes!

hugs to Wes and you as you make the transition! come hang out soon. xo

Thanks Laura, I'll pass on the hug. I definitely want to come out and see what you are up to!

hi tracey,
sounds like we are in a similar terra sig miasma... not sure it's worth it but it sure is pretty before it's fired. hang in there when wes leaves, i personally can't imagine what it's gonna be like (if i'm still alive) when sofia goes off on her own. right now she'll say, i wanna live with you and mom forever and i say... OK with me. i read back a few posts and commiserate with you about it seeming that no one is outraged by the environmental disasters threatening species (including ours) all over the globe... of course when you look at our "leaders", it's no wonder. florida will be under water and they'll still be dragging out some rube on tv to tell us that climate change is not real.

I hear ya Jim!
I had my first lump in my throat today on my way to Target to get Wes some last minute school stuff....

Sounds like my last soda firing - snot on 80% of the pots. :-( Fortunately we potters, after grumbling, just get on with the next firing. We're a hearty bunch!

June, we are indeed a hearty bunch! I guess it's the learning we are addicted to :)

Maybe you don't like your colors, but I might. I find sometimes the things that I don't like of mine others like and later I start liking them after I get used to the fact that they turned out differently than I expected, I hope you post the aqua ones since that's my favorite color.

Hey Linda, I know I really need to understand that most people have very different taste from me. Sadly that aqua one is the one the roof cracked on. Sometimes my work self destructs for a reason :) I usually let things that I don't like at first sit around for a while, sometimes I change my mind.....