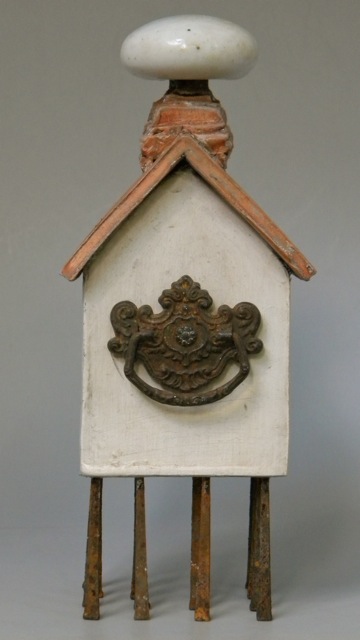 Wesley was helping me name all of these pieces the other day, and she suggested
"Styx" for this one, so Styx it is!
I had a taller finial on this one at first, but it made it look so tall and off balance that I changed it to this door knob that Meredith gave me, and it looks much more balanced. I really like this piece. It was a bitch to get all the nails lined up and even. I did a test firing with some of the nails but they turned blue and lost the rust, so if I use the nails, I will have to add them after firing. They did hold up to the temp though, so that's good to know.... 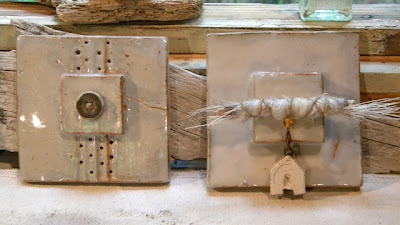 I made a few tiles for the ^6 and used the carbon trap shino. Not much carbon trapping going on, but they are nice and subtle 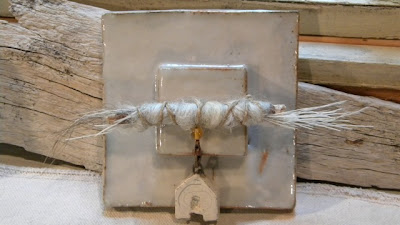 This one has moose hair from Denali that Cindy Shake sent me, wrapped in wool from Virginia that Anna Branner sent. This is a fun tile! 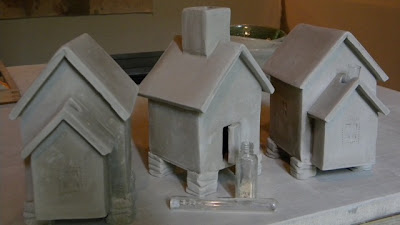 Yesterday I finished up these vase houses for the V is for Vase show in July. I bought a bunch of test tubes and little bottles at the scrap exchange some time ago and they are perfect for these, since they won't hold water. I just made holes in the tops of the vestibules for the test tubes and the chimney on the middle one holds the little bottle. Thanks to all of you for suggestions a while back when I first posted about this show and what to do. You all gave me some great ideas to build on!! 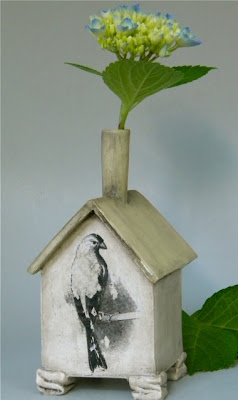 Love the tiles Tracey! (Took me three tries to spell tile right, what is with me today???) And your barns/turned vases are super.

these are all awesome! you are clearly in the inspired Zone, totally rocking the mixed media! xo

OH, yea- it all looks so good. Worth the extra time you are putting in. I do like the tiles.
They are a natural with the houses.

The test tubes and little bottle seem to work great. These may be the most interesting vases at the show.

Love that transfer on your work!