I swaney
I swigger
I hope my never
I hope my die
Great day in the morning
Well, I swaney to my time
Awwww shawww
Well, he never
Dad blameit
Dadgum
And don't you know, Bless Pete she went and.....

Gerry and I were naming all the things we heard our parents and grandparents say as we were growing up. Added to Gerry's list was "GERALD ALAN", that meant he was in trouble.

My grandmother would say I swigger to keep from cursing. Later when she got dementia s.h.i.t. was her favorite word to say.  My mom will use all of these phrases in one sitting if you stay put long enough. She can't say "yes I saw the moon", if you mention the moon, she will tell you about Betty Earl, her neighbor in High Point, and how one night walking home from the baseball game they got in the car with these boys and the boys took them over to the Hot Shop for a milkshake and they saw Carlos, the boy from Mexico and he said there was a full moon.... there is a story to go with every single damn moment no matter how small. Sometimes I call and I can sit for 45 minutes and never say more than uh huh..... 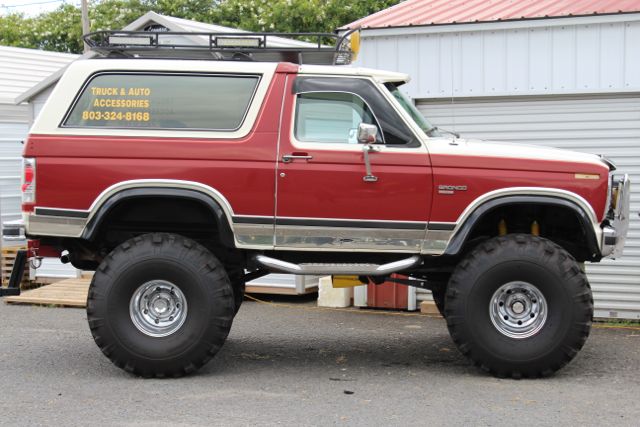 I don't know where this is going except some mind vomit from too many days on the road and too many nights in a hotel room. I have worked two back to back 70 hour weeks. I reset a store in Virginia Beach last week, it was 100 degrees outside and 120 inside, the AC didn't work. The AC has been broken in the last four stores I have worked in. The store in Va Beach had a large foam board poster up along one wall. I took it down and discovered a wall rotten with mold and holes where the AC had leaked water down the wall, from as far back as the manager figured, 8 years..... sigh. Such a week.  I worked with one guy a couple of weeks ago that was a brilliant kid, dropped out of high school three days before he was to graduate, said it just felt like bullshit to him, so he works on trucks. He loves a truck. I worked with a guy that got out of jail and was given a chance at a job, he is walking a thin line where trouble, I know, calls him to come on over. He was the most interesting person I met all week, I really liked him. We are in the same tribe. Not that I ever did anything close to getting me put in jail, but I know that feeling of going one way when everyone else is heading the other.

These guys I am with every day are kindred spirits. I know these boys. Their kind work like my daddy worked. Dirty fingernails, sweat on their brow, clothes soaked with perspiration. These are working men. Blue Collar. Not well educated, many of them, but they have good down to earth common sense. They don't look at their iPhones all day, they don't stop for a mocha latte. They drink a Mountain Dew, eat a biscuit and get to work. At lunch they warm something up they brought from home, or they run down to the store and get a ham sandwich. They start at 7am and they go home at 7pm, 6 days a week. They get Sundays off.  They have my utmost respect.

This job is making me stronger, physically and mentally. My boss pushes in a gentle but firm way and I do things that I don't think I can do, I come out on the other side and I have done that thing. I didn't think I would get through last week. I knew the stores and I knew the work ahead of me. But it got done. I got an email from the district manager saying this was my best work yet and that I was amazing. Let the endorphin release begin, ya know?! This job is a drug. The adrenaline and the endorphin cocktail are addicting, and its what keeps me from passing out at the end of the day I guess.

I come home on Fridays to my beautiful new home and I sleep all day Saturday, some on the sofa, some out in the garden, some on the porch. I cook breakfast for us on Sunday and then I sleep some more. This is not sustainable and at some point, things will have to change. But for now, its fine, I am able to do it and I actually like it. Gerry is traveling much now too, so its fine for now. I look down the road and wonder where I will be a year from now. My life takes major turns in just a years time, it seems. Wesley will be moving home at the end of the month. Another turn. I am overjoyed. Her life has been much like mine this year. What a year of growing and learning about ourselves. What a journey..... 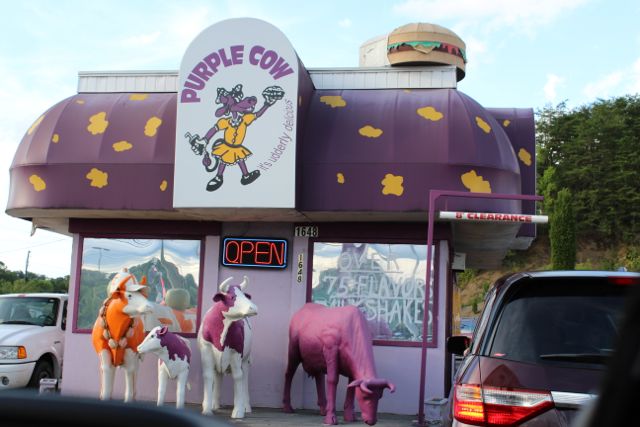 And to think,  I would have never eaten at The Purple Cow had I not taken this job. Definitely a highlight of August. AMAZING menu! 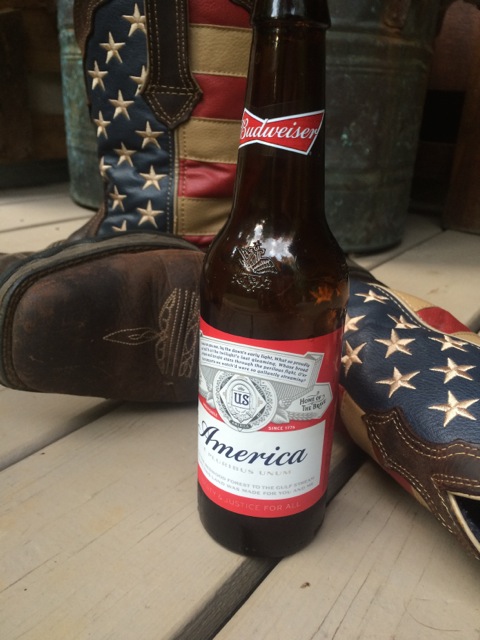 I was drinking my favorite beer this weekend when Gerry mentioned the name change. I had not even noticed it. He had told me this was coming, the AP did a story on it. But, seriously Budweiser, WTF? You have the most iconic beer around and you decide to call it America?!  You stupid

I am sitting in a hotel room having one from my cooler right now. Its 10:30 pm, I just got in from a store remodel and this is my supper. I had no lunch, supper is beer and crackers. This is not good.
The week/month ahead has me already tired and it has only just begun. Three store remodels in WesternVirginia and Tennessee this week. Three next week down in Charlotte, two the next week in Eastern Virginia, and five store visits the following week in South Carolina.
September.... more of the same. Not quite sure what I got myself into here with this job, but I have done 20 stores and have 30 more to go. I'm going to pretend I'm halfway there. 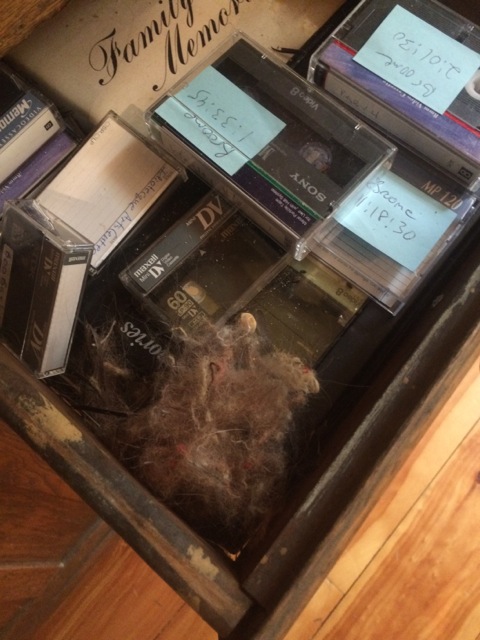 A mouse is living with us. He is storing food all over the place. I found cat food in my luggage, cherry pits behind our bread box, peanut shells in a box that holds my cutting boards, and today Gerry found some hidden coffee beans, best yet. A mouse on caffeine. Yikes! It built the sweetest little nest in a drawer of family video tapes from yarn I guess it found up with my loom. Hazel, I think this is the yarn you spun. 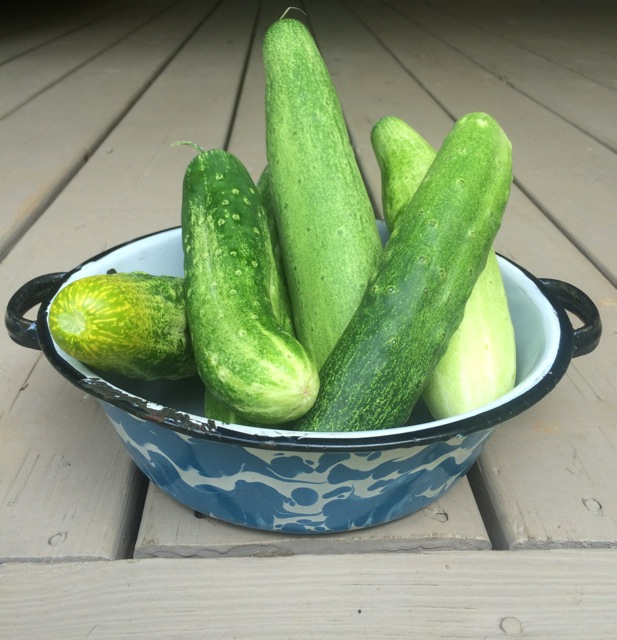 We put in a small garden just after we moved in to our new place, just because raised beds were there and the whole point of moving was to have a garden. It was late June, but we are harvesting beautiful cucumbers, tons of tomatoes are coming in, peppers and various herbs. We have some okra and potatoes, figs and scuppernongs are ripening.... its a small effort, but worthwhile.

We have rose bushes that I gave up to the Japanese beetles. I pick off what I can but its just scratching the surface, they are relentless and I hate them. At first I wore gloves and timidly dropped them in a bucket of soapy water. Now I call the chickens, I pluck them off with bare hands and drop them in the mouths of my hungry girls. My poor monk friends would shudder. 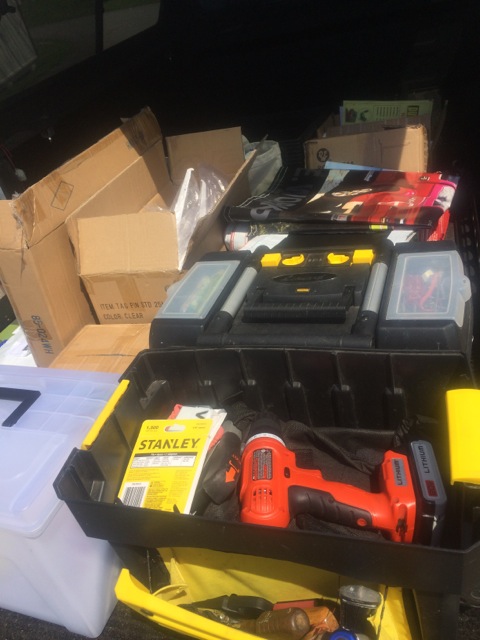 My truck is serving me well. It is packed with tools and banners and new slat wall hooks, shelves, signs and luggage, a cooler, computer, camera, what a caravan. 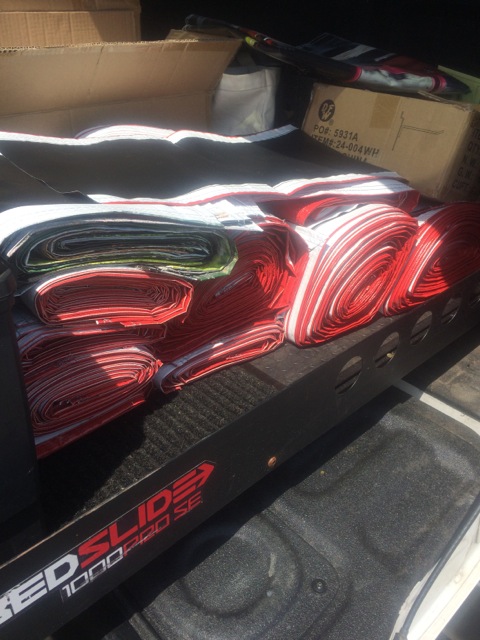 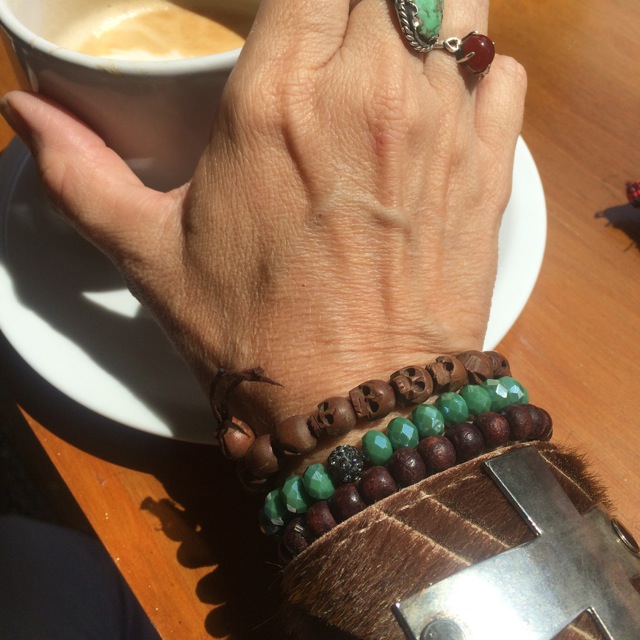 I actually got a day to go out with a friend and treated myself to a fun new cuff made of some sort of animal fur and a silver cross. It sort of represents everything this company I work for is not. Today the manger at one store asked who I was voting for. He squirmed when I said Hillary, I squirmed when he said Trump. He is a super nice guy, one of my favorites to work with..... but Trump?
Oh God, help us!
at August 01, 2016 7 comments: