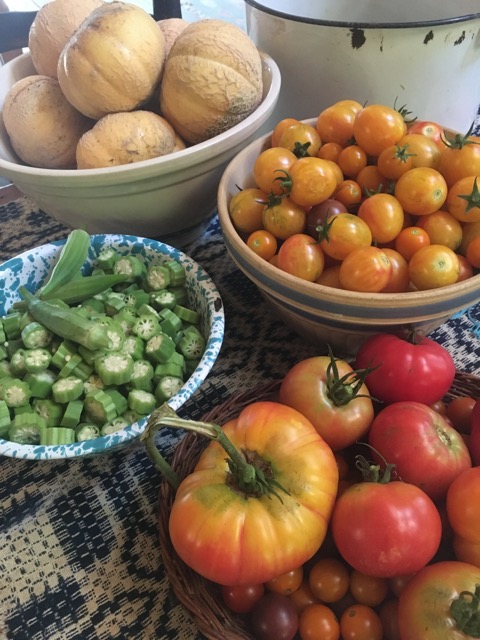 My southern heritage has given me a love for okra, squash, sweet potatoes, rice, tomatoes, corn, watermelon. These foods grow well in the south, grow well in our garden. I have been dealing with vegetables nonstop on a daily basis, I have also been piling up cookbooks around me, searching for recipes to prepare and preserve all of this food coming in to my kitchen. I have a huge collection of cookbooks from the South, church cookbooks, Junior League cookbooks, cookbooks from restaurants in S.C and New Orleans, etc. 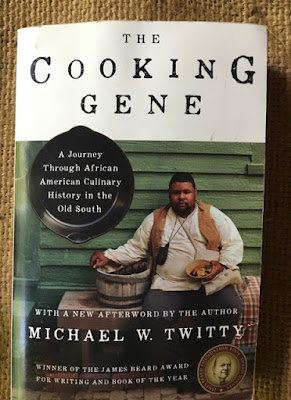 One thing I have noticed as a repeating theme in many of my old cookbooks is how "White" they are. White women discussing recipes and food preparation that mostly originated from slave owners that learned these recipes from their Black cooks. Many of the foods I love and the way they are prepared came to us through the slave trade, they are gifts from Africa.  Michael Twitty writes so eloquently in his book about the origins of the foods I love and reading this book gives me an even greater appreciation for these foods and how they came to us from Africa.
For instance, yams (sweet potatoes) were found to be a good food to nourish people that were just hunted and captured and put on boats for the long voyage to the United States. The enslaved could not eat the food that was initially prepared for them, it did not sustain them, but the sweet potato did.  Before these humans were loaded on ships, the ships were stocked with yams and these yams ultimately found their way into our culture. My grandmother and Gerry's dad make the best sweet potato pies, both of them knowing how much I love a sweet potato pie, almost always had one for me when I came to visit. Knowing the history of this vegetable gives it an even deeper and more profound meaning...... we  really should think more about these origins of our food instead of just picking up a package at the local grocery. Food is the most important thing for our survival and yet we take it for granted like we do the air we breathe. 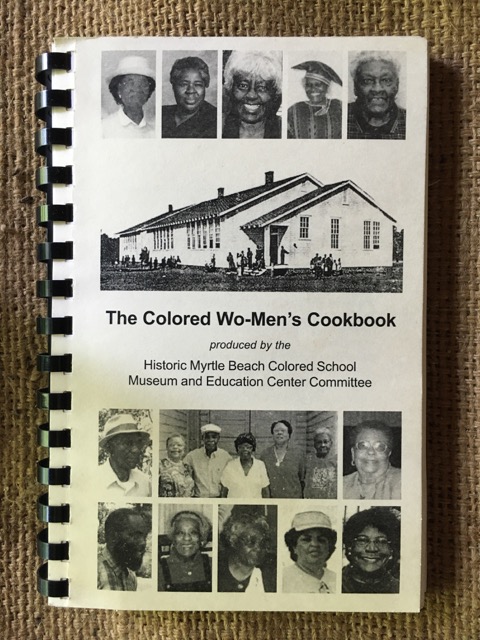 I treasure my cookbooks and read them like most people read a good novel. I take them to bed at night, I read them in the afternoon, sometimes in the morning to get an idea of food planning for supper. They would be the thing I would want to save from fire.

My mom gave me this Colored Wo-Men's cookbook for Christmas one year. It was produced as a fundraiser for the Colored School museum. Many of the women featured were mothers or grandmothers of girls I went to school with. Myrtle Beach did not have a school for Black children in 1930. This first colored school was created for them. In 1973, our school system became integrated, and I was bussed to Carver Elementary, which was the replacement for this first school. As they moved white children in, they changed the name to Central. It was a big deal in this community for everyone. I first met these women at that school. This cookbook is filled with all the foods I love and I am grateful for their knowledge of good food. 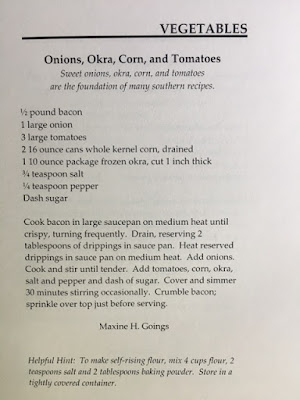 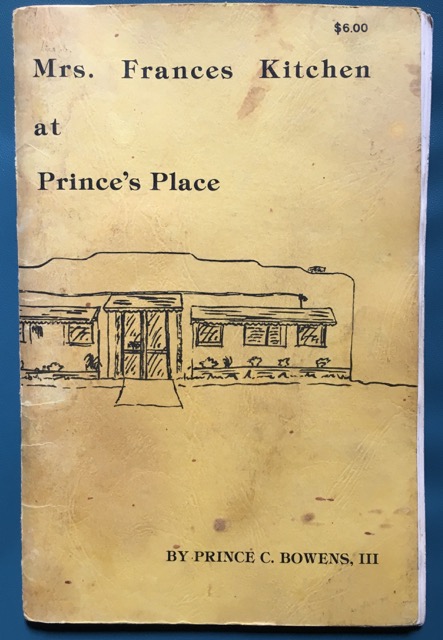 This cookbook is probably the one that has had the most use over the years. My mom gave it to me when Gerry and I got married, it is how I learned to cook. Mrs. Frances was well known in the community, Prince's Place was a tiny restaurant near the school I mentioned, and was in the "colored part of town" as folks would say back in the 1970's (seriously!) Since I went to school in the "colored part of town" I had no issues with also eating there. I worked for Belk Dept store in the '70's and every day for lunch, we would go to Mrs. Frances' to eat. Her beef stew and collard greens were like none I have ever had since.

I can still vividly remember every single thing about this place.  Gerry and I ate at Fearrington one year for an anniversary and I'm sure the bill was over $200.  I can't recall what I ate, but I can still taste that beef stew at Prince's Place. Mrs. Frances and the restaurant are gone now, but will live forever in my memory. 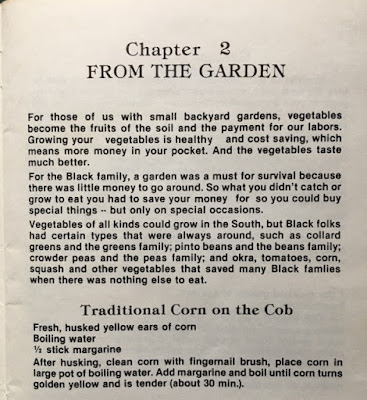 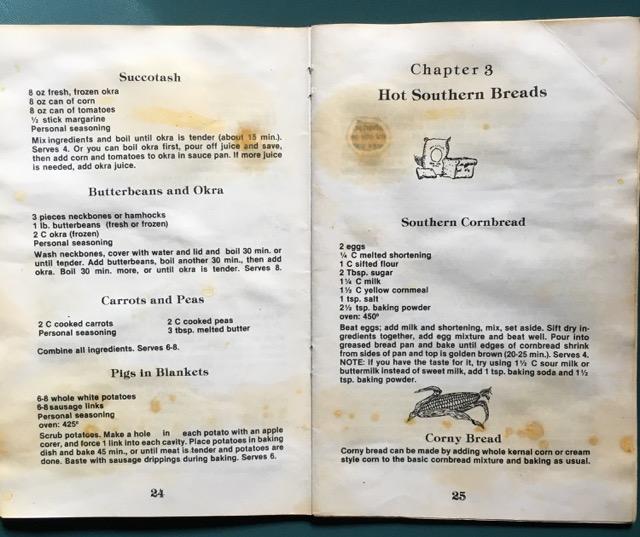 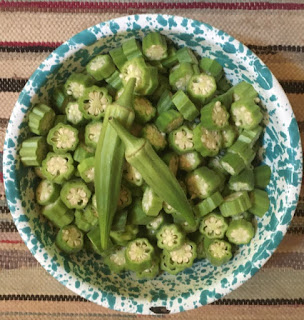 One of my favorite foods to cook in summer is okra. It is coming in like crazy right now and we are picking it twice a day. It literally grows that fast! It is to me, what southern food is about. Michael Twiity has a good post as a guest blogger here about the origins of okra and a recipe for okra soup.
https://toriavey.com/history-kitchen/history-okra-soup-recipe/

It had not occurred to me until the BLM movement, how many of my cookbooks are from Black food culture. Even my very White church cookbooks have their origins in African cooking. We are all so connected by food and yet we are so separated by judgement of race. It is such a shame that we cannot come together and celebrate each others differences rather than judge and hate because of those differences. How would we have good food if not for the contribution of Black culture!? What the hell would I eat!!! 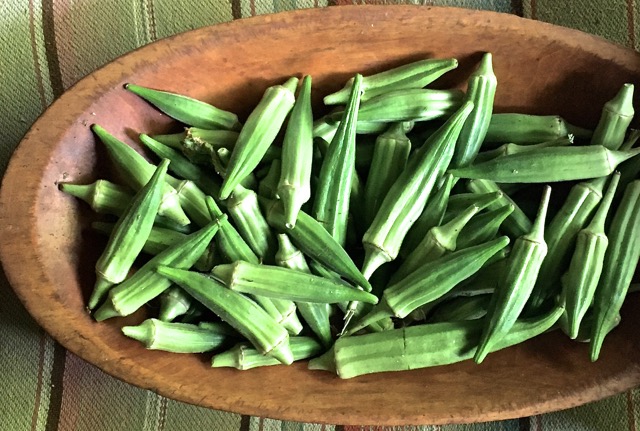 A great post my friend - I think you may be gardening your way to a new career involving food. You have in residence an artist and photographer to help and your love and enthusiasm comes pouring thru your words..hmmm?

The okra soup recipe looks good. Unfortunately, we realized a couple of years ago that J was allergic to it, so we stopped growing it. Those are the cutest cantaloupes. Have you done a taste test yet?

History in a cookbook.
We have much to learn.

Z. don't encourage me lol. From what I can see there are plenty of food bloggers out there already!
Laurie, we did test the little cantaloupes, they taste like cantaloupe. I think they could maybe use a few days inside to ripen a little more, but I like the size. We each had one for breakfast, so good!
GZ, food is an amazing history, I love reading books that relate food with histories

I have watched and listened to a lot of segments on PBS and NPR about the roots of southern cuisine. It is astounding how white people embraced, and often claimed the foods that came from Africa. The sad thing is that so little has changed over the years. The same people that love to eat Mexican food, despised Mexican immigration or hearing the Spanish language spoken.
Thank you for sharing your cookbooks, they are well worn and filled with love!